One of my favorite parts of the holidays is finding pockets of time to read. One of the books I have been picking through is a biography of Charles Haddon Spurgeon. Anytime I read about Spurgeon I am inspired. Before there were megachurches, his was a megachurch. He became the pastor of a historical London Reformed Baptist church at a young age. When he became pastor there were less than 300 members. 38 years later, at the end of his ministry, there were over 5,000 members of the church. He routinely preached to 15,000 people on a Sunday and many times preached to over 20,000 people. 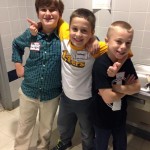 I know Denton is not London, and I certainly know that I am no Spurgeon, but I have to admit that reading Spurgeon has given me a renewed excitement about our church in 2016. You see, Spurgeon and the Metropolitan Tabernacle share our same Biblical gospel convictions…the Bible is the Word of God and his gospel is the power of God to save and thus I believe our best days are in front of us.

God has truly been glorified in our new church this past year. We saw God’s glorious faithfulness in 2015. We experienced his grace, saw him save souls, experienced him conforming us to him image, and watched him establish his church. Let me throw some exciting numbers at you:

Each of these graces should be celebrated. However, I believe our best days are ahead of us. As I have spent the past 4 to 6 weeks praying about next year, I continued to come back to a little verse that is loaded with meaning.

James 2:23 reads, “And the Scripture was fulfilled that says, “Abraham believed God, and it was counted to him as righteousness” – and he was called a friend of God.”  In this verse James explains God’s grace as salvation coming to Abraham through his faith in God, which makes Abraham a friend of God.

James is quoting Genesis 15:6 where God’s Word calls Abram to believe in something hard to believe…that a very old childless man would not only have a child but his descendants would be a numerous nation. We have all been at those difficult crossroads of belief, when what God is saying doesn’t really seem plausible. However, we are called to believe. What Genesis 15:6 teaches us is that God’s grace came to Abraham when he trusted God’s Word and thus experienced God’s salvation.

After James quotes this verse, Paul quotes it twice. He quotes it in Romans 4:3 as well as Galatian 3:6. Both passages help us understand the AVENUE of salvation. How do we move from being declared guilty to being declared righteous? Most believe it is by keeping all the rules. However, these passages use Genesis 15:6 to explains the AVENUE of salvation is via faith, not keeping all the rules. Thus, God’s grace came to Abraham not by strict adherence to the rules, but by faith in the Word of God. The AVENUE of Abraham’s salvation, and thus our AVENUE, is faith.

James’ goal is a little different. Many have concluded that James and Paul are somehow at odds with each other here, however that is not the case.

First, James is likely the earliest NT writing (most likely between 44AD and 49AD), while Romans is most likely written between 55AD and 57AD and Galatians between 49AD and 55AD. This is important because it helps us see that James is not arguing against Paul’s writings, because Paul’s writings had not been written yet.

Second, James and Paul are not at odds because James is not talking about the AVENUE of salvation (which is faith), but rather the NATURE of that saving faith. James is not saying keeping all the rules redeems anyone. James agrees that salvation is through faith alone, but his concern is with the NATURE of that faith. James 2:23 is advocating for genuine faith. So, God’s grace came to Abraham not by strict adherence to the rules, but genuine faith in the Word of God. The NATURE of Abraham’s saving faith was genuine to the degree that good works were evident. Because of Abraham’s genuine saving faith, he was categorized as a friend of God.

James is saying that genuine faith produces faithful works. He is arguing against false faith that remains private, that doesn’t produce faithful works.

We are entering into an election season (yuck) and politicians are in pandering mode. Many politicians are trying to demonstrate their religious credentials. However, in a secular age, many don’t want to come off as too religious. Thus, one path for them is to simply say they are a Christian then say their convictions are private and they don’t want to talk about them. That leads me to believe they are hiding something, that they are not genuine in their convictions. It leads me to believe they are just sleazy politicians.

When looking at the three New Testament citations, James is the only one who makes this point about “friendship” when citing Genesis 15:6. Once we have genuine faith in Jesus’ gospel, we become friends with God. BIBLICAL FRIENDSHIP is what I pray Redeemer Church is all about in 2016. Over the coming weeks, I will be laying out our vision of friendship with our Church and with our City.

All Christians should love Spurgeon. We should love his theology, his sermons, his books, and his classic quotes. But I have always loved that he left a legacy of more than sermons and books.

You see, Spurgeon lived during the Industrial Revolution of the mid and late 19th Century. The population of London had just doubled from 1800 to 1850. Rapid urbanization brought new social problems. But Spurgeon didn’t just preach sermons and write books, he sought friendship with his city. He started:

Matt Carter wrote in his book “For the City”: “It got to the point that if [the] Metropolitan Tabernacle had shut down during that [those] decade[s] of grappling with the problems of the Industrial Revolution, the city of London would have been crippled.  They would have grieved the loss of the Tabernacle.”

I love that! Friends, I know we are new and don’t have millions of dollars and don’t even have a building like the Metropolitan Tabernacle. I know Denton isn’t London, and I am no Charles Spurgeon. But, I want to us to ask the question, “If we were to cease to exist, would our city grieve our loss?”  Would our schools miss us? Would our neighborhoods feel a void?

In 2016, my prayer is that we would fulfill the call of James 2:23. My prayer is for us to be good friends to each other and to our city. God has called us his friends as a call to be a friend.