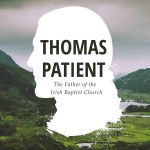 I have recently published a book on Thomas Patient (HERE).  Prior to my research I had never heard of Patient.  In many ways, he was an ordinary Christian rather than one of the luminaries of his generation.  In my research I had difficulty determining his family of origin.  It was also difficult to determine his date of birth.  He was a common man.  Little has been written about his life, even within Baptist studies.  However, his story built my faith.  His journey was inspiring.  Patient left his native England for a difficult journey to the American colonies.  He embraced the New England faith only to have his convictions change on the issue of believers’ baptism.  As a result, a warrant was issued for his arrest causing him to flee back to England.  He was a man whose biblical convictions led to greater hardships in his life.  As I first learned of his trials I was also dealing with some hardships due to my biblical convictions.  I saw this man “fight the good fight of faith” (1 Timothy 6:12), which in turn inspired me to greater faithfulness.

When Patient returned to England he eventually connected with William Kiffin.  While pastoring with Kiffen he helped shape the First London Confession of 1644.  This confession was the initial Particular Baptist statement of faith.  It was modeled after the separatist confession (A True Confession) of 1596.  Most of the articles in the 1644 confession mirror the 1596 confession.  However, the Baptists expanded their treatment of the triplex munus Christi.  They also add articles on the nature of faith and the gospel.  Further, they also clearly defined their doctrine of believers’ baptism by immersion.  Taking the time to compare those confessions deepened my theology on each issue.

After traveling to Ireland, John Owen returned to England and preached a sermon titled “Steadfastness of Promises, and the Sinfulness of Staggering” to Parliament on February 28, 1650.  Owen proclaimed in his sermon that in Ireland there was only “one gospel preacher for every walled town in the English possession in Ireland.”[1]  He then explained the Ireland “mourneth and the people perish for want of knowledge.”[2]  As a result, Parliament designated funds to send ministers to Ireland.  Thomas Patient answered the call to carry the gospel to the Irish.  As an ordinary Christian, I was inspired by Owen’s and Patient’s evangelistic fervor.  As I read Owen’s sermon and saw how Patient took the difficult road of being both an army chaplain and a church planter my zeal was stoked.  I was in the middle of planting a church and was encouraged that I was doing what Christians have always done.  I was getting to participate in the same mission that Owen and Patient did so many generations ago.

While in Ireland, Patient wrote one of the earliest full-length books on the doctrine of believers’ baptism.  He faced controversy over the doctrine and wanted to explain his position.  He worked to simply provide “clear Scripture evidence”[3] to make his case.  In addition to explaining and apply Bible passage after Bible passage, Patient addressed the theology of the covenants.  In many ways, the Puritans were still in a season of solidifying their views of the covenants.  As I studied Patient’s views I found many unconvincing.  Even though I hold to believers’ baptism, I rejected many of the ways he sought to distinguish covenants in the Old and New Testaments.  However, instead of hindering my theological development while wrestling with Patient’s views, I found reading this history only deepened my theology.

Reading History Deepens Our Insights About Our Contemporary Culture

As the Protectorate fell apart, Patient returned to England.  He then experienced the persecutions of the Clarendon Code resulting in a time in jail.  Patient refused to submit to the Book of Common Prayer and continued to lead outlawed congregations.  These laws gave me a perspective that we are not persecuted in America and Canada.  We might be vilified, but pastors are not thrown in jail for organizing their churches according to their biblical convictions.  However, it also gave me historical warnings that persecution can come to America and Canada.  Watching closely the religious liberty laws being debated and handed down is an imperative for all ordinary Christians.

The enjoyment of history is in my blood.  My father used to take us to Civil War battlefields for our vacation.  In case you are wondering, I actually loved it!  I also loved every second of traveling to another country to find primary sources on Thomas Patient and then spending hours and hours writing this new volume.  However, I am not foolish enough to believe that everyone will find researching history to be fun.  But, we all love good stories.  Good history is about telling good stories.  Even young children have fun learning about the lives of past Christians.  The historical Christian luminaries are inspiring.  But, the common Christians can be just as edifying.  Reading the history of Thomas Patient is an encouraging journey for today’s ordinary Christians.

[3] Thomas Patient, On the Doctrine of Baptism, And the Distinction of the Covenants (Henry Hills: London, 1654), ii.