“Paul, an apostle— not from men nor through man, but through Jesus Christ and God the Father, who raised him from the dead— and all the brothers who are with me” (Galatians 1:1-2). 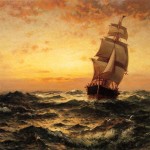 Paul opens his letter to the Galatians by describing himself as an “apostle.” What in the world is an “apostle”?! The root meaning of the word is a “sent one.” It is similar to a Hebrew term used for a delegate or a lawyer who was empowered by someone to share a message or do a job in their place. The Greek term used here was also a naval term for an emissary who was sent on a vessel for a particular authoritative errand. The idea is that an “apostle” is someone who has been given authority by a greater power in order to deliver a message.

Paul is actually referring to what we would label an office or maybe a title. Paul was an Apostle (with a capital “A”). I don’t believe there are still Apostles today, but rather it was a unique office given to a group of men who actually saw Jesus and were selected by him to share his gospel message. I believe their primary role was to share Jesus’ message by writing the New Testament. Paul was not one of the original twelve Disciples, but if you remember from Acts 9, Paul was dramatically converted to Jesus on the Road to Damascus when Jesus appeared to him.

But, it is also important who made Paul an Apostle. Paul was not voted into his Apostolic office by a group of men. He says in the opening verse that he is an apostle “not from men nor through man, but through Jesus Christ and God the Father.” God Himself made Paul an Apostle.

The Bible goes further by going back to the cross and describing the type of God that has made Paul an Apostle. It is the God “who raised him from the dead.” This is a God who has power over life and death. He is the creator of all things. Even though he is holy and perfect, this God chose to satisfy His own wrath by dying a brutal death on the cross as an atonement for our sins. Jesus’ resurrection then defeated death and became the good work we can trust for our salvation. We don’t have to try and earn our salvation through many good works, but we can trust in his one good work for our salvation. So, not only is he a powerful God, he is also a good God. That is the God who made Paul an Apostle.

So what?! Maybe we understand why this was important to the original readers in Paul’s day, but what is the significance for us?

GENERALLY, Paul’s Apostleship is important because we live in a day that is prone to discounting Paul by pitting him against Jesus. Many people (even in the church) do this all the time. I have even stepped into heated debates with other pastors who reject a portion of Paul’s teaching on the grounds that Jesus didn’t speak into that issue?! Many people create a caricature of Jesus as loving and focused on relationships, while Paul is more harsh and only focusing on doctrine not people. They claim that doctrine divides and that Paul only cares about doctrine and doesn’t pastorally care about people. Please hear me, those popular caricatures are simply false.

First, many of Jesus’ parables and teachings take a direct in-your-face approach. Do you remember him cleansing the temple with a whip…Indiana Jones style? We also see tender even heart-broken words from Paul in his Epistles. Second, all of the Bible is equally God’s Word. The gospels are not more important or more truthful than Leviticus or Revelation or Jude. All of it is the inspired inerrant Word of God. That truth is partially based upon the fact that Jesus himself appointed Paul as his Apostle with the message he shared in books like Galatians and Ephesians and Colossians. Third, the purpose of the Epistles are to look back at the Gospels and explain what happened. The very nature of the Epistles demands that they will go further in depth on different issues.

SPECIFICALLY, we are to accept the message of Galatians as God’s authoritative Word. Paul makes a link between his Apostleship and the message he is going to share in this book. His Apostolic office is the credibility of his gospel message. So in Galatians when Paul calls us to daily lean on the gospel versus keeping religious rules or operating out of our own self-righteous strength, it is authoritative truth for us! If you want to argue back at Paul, you are actually arguing back at God! These words are God’s Words coming like a ship bringing us life saving news!

Do some heart work today. Are you viewing all the Bible as from God? Are you viewing the Bible as the ultimate authority in your life? Do you need to change your thinking or attitude about the Bible? Ask God to help you see attitudes and habits that need to change in order to align yourself with the truth of God’s Word. Thank God today for not leaving us in the dark, but rather giving us His Word so we can know have to find salvation and joy. Finally, select a Bible verse to memorize this week.