“(25)Now his older son was in the field, and as he came and drew near to the house, he heard music and dancing. (26) And he called one of the servants and asked what these things meant. (27) And he said to him, ‘Your brother has come, and your father has killed the fattened calf, because he has received him back safe and sound.’ (28) But he was angry and refused to go in. His father came out and entreated him, (29) but he answered his father, ‘Look, these many years I have served you, and I never disobeyed your command, yet you never gave me a young goat, that I might celebrate with my friends. (30) But when this son of yours came, who has devoured your property with prostitutes, you killed the fattened calf for him!’ (31) And he said to him, ‘Son, you are always with me, and all that is mine is yours.” (Luke 15:25-31) 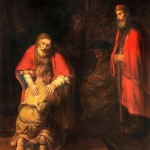 Most call this story found in Luke 15:11-31 the “Parable of the Prodigal Son.” However, most also think the story ends at verse 15:24, but Jesus provides more to this story. Remember this story is about two brothers, not just one.

We all know the younger brother didn’t have love for his father…but just wanted his stuff. Out of this selfish unloving heart bore a reckless hedonistic life that resulted in brokenness. Now we see the older religious son. But sadly we don’t see a happy man…but an angry man. This son is described by Jesus as angry and he is refusing to go in and commune with his younger wild brother. Unlike the father, he doesn’t yearn for him or have compassion on him or embrace him or kiss him or restore him or be reconciled with him. Unlike the father, the older religious brother condemns him.

Deep in the corners of his heart, when he reflected on his wild younger brother, he compared himself. The anger he felt towards his brother birthed self-righteousness. Every time his blood boiled over his brother, he soothed it with the thoughts, “I am not going to be like him” and “I am better than him.” His anger birthed pride.

His religious pride went to entitlement. “He went off and had his fun but in the end I’m going to be better off because I remained faithful. I deserve better because I am better.” Is that you today? Have you ever said those words? Have you ever thought those thoughts? Have you ever felt those feelings?

Has your religious faithfulness simply produced a self-righteous judgmental heart? Has the free grace of the gospel birthed a heart that feels good about itself because it is more faithful than the poor soul that is struggling? Has the cross of Jesus only bought pride for you? Are you an older brother?

But the father also has a message for older brothers. If you are angry and self-righteous and entitled and judgmental, he is faithful to convict you, but he is also faithful to draw you back to your first love. He is faithful to draw you back to Jesus. You see, this glorious faithful loving father has a message for us too. The father says to him, “Son, you are always with me” (15:31). Being with the Father was the older brother’s blessing! Repent and return to your first love…Jesus…not his stuff!

Do some heart work today. What stuff do you care more about than getting to know the Father better? Whose opinion do you care about more than Jesus’? Ask God to soften your heart to Him and make that stuff and those people taste like mudpies compared to the glory of Christ. Thank God for the fact that he loves you so much that he will convict you of your sin, even your self-righteous pride. Confess to a close friend or your spouse how your religion has produced pride in your heart and ask them to ask you about the condition of your heart every few days.